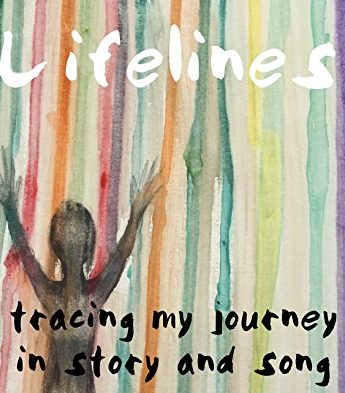 “Lifelines: Tracing My Journey in Story and Song  “

I recently published a book for those wanting to know more of my story and the story behind some of my songs! These stories trace the lifelines of God’s healing and grace in my life.

Here is an excerpt:

I grew up in a house on Horseshoe Road in Lancaster, Pennsylvania. In the midst of Amish and Mennonite farms, that drafty rental formed the backdrop of my playing days.

An Amish family, the Kings, lived across the road, and their kids sometimes invited us to run around in the barn or whisper through the house. I’ll never forget the smell of that natural-gas-heated kitchen or the smooth, simple surfaces in that dimly lit Amish home. Or the fact that the cats and kittens lived in the barn and were only there for the mice and rats.

It made me wonder and worry at the practicality of their lives. The horses’ main purpose was pulling their black buggies. The dog that hung around the gravel lane was less a pet and more a second thought. The scraggly cat with the oozing eye would never see a veterinarian for her ills. Even the mules seemed to be just tools for fieldwork.

Dogs and Cats and Mice, Oh My!

In my house, the animals were everything. They formed the basis of love in my early years. My cats and dogs were there for touching and hugging. Had I a mule, I’d have coddled him and kept him in my room. What would the Kings have thought if they knew I had a mouse in a cage in my house? I can’t remember her name, but I can still picture her fresh litter of wriggling pink babies.

My hamsters were a staple and scores must have scurried through my childhood. Added to their naturally short lifespan came the playful but deadly tosses from cats and kids alike. I remember coming home one evening to a dark bedroom where Spooky, my Siamese, was batting something around on the bed. I flicked the light to find my Sophie mostly dead beneath his playful paw. I have no idea how the poor thing got out of her cage.

The Birds and the Bugs

Many damaged birds found their way into my living room infirmary. There was a sparrow with a tumor that would have died peacefully had Spooky not followed his feline instincts when no one was watching.

I even had a pet praying mantis named Herman. Each day I fed him freshly whacked flies. With lovely circumspection, he’d examine the squashed insect I dangled before him, then, swift as a whip, those spiky forearms grabbed that fly from my fingertips. Herman ate with relish and refinement, keeping those black-dotted orbs on his dinner and me simultaneously.

A few weeks later I discovered that he was a she, as I found my lovely green friend dead in the jar with an egg sack snugly glued to her twig. Her babies by the hundreds eventually hatched, and, like Wilbur keeping his piggy promise to Charlotte, I set Herman’s brood free to carry on her legacy. 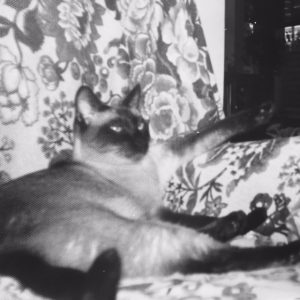 Spooky was my best cat and had stayed on with me through my high school years. He made the move with us when my parents split up and we left the house on Horseshoe Road. After a few years in a mobile home, we moved again twice, and he came along. Osteoarthritis and old age had hobbled him by the time my turn for college arrived. I had to put my childhood constant to sleep and bury him in the yard a few days before saying good-bye.

I still dream about Spooky and some of my other cats. Something about the way they smelled and felt in my young, unsteady world. I could count on their warmth, their love and acceptance.

They needed me, and I needed them.

Of all the pets we had, the family dogs were beyond compare. My sister Ginny and brother David and I had three dogs across the years that we named “Puppy.”

Puppy #1 actually was a puppy that never lived to see her doggy days. I remember the accident like it was yesterday. It was a Saturday morning and David and I were playing in mud puddles in a low strip of grass that bordered Horseshoe Road.

Our backs to the macadam, we hadn’t thought to leash our wandering Puppy. Duh-blunk. I heard the thud of what could have been a brown paper grocery bag run over by a car. I straightened and spun to look. There was my puppy on the road and a shock-faced woman coming from the side of her car.

I ran screaming into the house where my dad rushed downstairs from deep sleep. He met the apologetic driver at the door in his underwear, so afraid it was one of his kids who had been hit. Realizing what had happened, Dad left to dress. A minute later, I followed as he went to see what was left of our Puppy. She was alive for a few more moments as we cried there in the middle of Horseshoe Road. My eyes still fill up when I retell the story.

Puppy #2 was the love of my life when I was 9 years old. He sang for joy every time the family returned to the house, always ecstatic that we had come back. His acceptance and availability was exactly what we all needed.  I was crushed when we had to give him away because my parents separated and we weren’t allowed to have a big dog in the trailer. Losing him seemed the saddest part of my parents’ leaving each other.

Puppy #3 came from the shelter and was small enough to fit with us in the mobile home. She lived with our family for 14 years. We walked many roads together. She also went boating, swimming, river-rafting and jogging—wherever her people were! She died long after we three kids had grown and gone away to college.

Signposts and Symbols of Healing and Grace

Who can account for the impact of these pets? Their lives seem to be signposts and symbols of a sort.

My first Puppy died early, as did my innocence, marking a time of loss and death that probably prepared me for some losses ahead.

My second Puppy could be a symbol of grief and heartache that eventually healed.

And my last Puppy lived to tell of life’s longevity, normality, and dependability even when it begins in disruption and confusion.

Spooky, like the dogs, showed me unconditional love for all of his years by my side.

Maybe I am reading too much into it. But maybe not.

Whether insects and rodents or cats and dogs, these wonderful creatures mark the cycles of life and death on a small scale, which were, for a little girl like me, exactly what I needed.

If you want to read more, find Lifelines on Amazon or an autographed copy at my store.

More like this: I Wanted My Dog Dead, Making Pretend

12 thoughts on ““Animal House”: A chapter from my book, Lifelines”