Walking with my daughter, Carina, on a lakeside trail recently, I happened upon an epiphany:

I project when I don’t connect.

What I mean is, I create mental projections on the wall of my imagination if I do not have real-life interactions and conversations.

Like when a friend has not called me in a month, I might picture all the ways in which I have probably offended her. Another example is how I will tell myself a tale of rejection to make sense of an unanswered message I’ve sent with the sincerest of emoticons.

By creating a movie on the screen in my head, I can come up with all kinds of fictions explaining why someone hasn’t called, texted, emailed, “liked,” or otherwise given me a thumbs-up to acknowledge our relationship. When real-life conversations have fallen away, my brain works overtime to fill in the blanks.

For instance, while side-by-side with Carina on the trail, I was explaining to her how I had been feeling disconnected from my brother who lives in another state. I admitted to her that I hadn’t called him because it was clearly his turn to call me. Way past his turn, actually, because I had been doing all of the connecting in the past year or so it seemed. I felt a bit hurt and had listed in my head all of the ways in which I deserved better.

Also, I had projected on the broad screen of my skull a colorful parade of the reasons he’d been neglecting, avoiding, and even rejecting me. I had come up with some scary scenarios and worst-case worries.

Maybe some of my mental projections were true. My feelings were definitely real. But I had gone too far. You see, I had left the mainland where the wires and synapses fire at the sound of human voices. I had crossed over to the island of extended imagination where weak signals send scrambled messages at best. 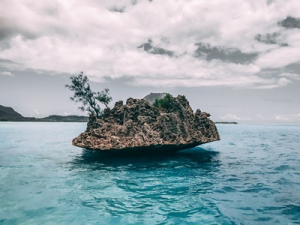 My phantom brother, in that far-off country without communication, had become a flickering kind of figure. Like Princess Leia’s holographic image projected from inside R2D2, he was trapped like an apparition in my memory. I could only tell myself stories about what was going on between us for I did not have the facts.

“Carina,” I said, “I finally just decided to call the guy, whether it was his turn or not.”

I had pressed the green icon on my smartphone. When he answered, I told him immediately what I’d been thinking and feeling. My throat got a little choked. He said, “wow, you got to that pretty fast.”

I did. We talked for a long while. He told me about how busy he’s been with his job and family. We laughed about some of the tales I’d been telling myself.

Thank God for smart phones with good connections. When we pressed our red icons good-bye, I felt so much better. I remembered my little brother. The kid he was and the man I love. There’s nothing like an honest conversation for dispelling hallucinations.

With Carina it’s easy. Together on the path, we connect before there’s a chance to project. With others I love, there’s just more distance to cover. It can be done though. All it takes is making connections.

Henceforth, I will remember this lesson: don’t project–connect!

Instead of playing old movies on my wobbly mental screen, I’ll shut off the projector and use that modern machine. Just press green.

14 thoughts on “Making Connections, Not Projections”