The Beginnings of Fear

When I was eight years old, a strange man banged on our front door.

My mom opened it and he asked her, “this cat out here yours?”

Looking over her shoulder at me, he leaned in to say something which only she could hear. Mom turned to me and my sister and brother and told us to wait inside.

“Stay here!” I heard her shout as the door slammed behind her.

But I didn’t stay. I followed her out and around the side of our house on a 10-second delay so she wouldn’t see me disobey. When I turned the corner, I saw the man was pointing at my cat in the road– what was left of him. He had run over him with his truck.

I can’t remember how I felt then or what I did immediately after that discovery. Did my mom see me? Did I tell her what I’d witnessed? I don’t think so. I must’ve run back into the house.

She came in to carefully announce the bad news. “Bruno is dead. Sorry, kids. He was hit by a truck. He must’ve run out into the road.”

I do remember some days later getting off of the school bus on that same road and bursting into tears. My cat was gone because I didn’t take care of him. I began to fear the mistakes I could make. I began to wonder if I could have saved him. Did I have any control over the dangers on the road?

Throughout my childhood there were a few more pet vs. car incidents:

I lost a puppy to a car. Ka-thump.

I saw another pet dog wrestle a moving car’s tire with his teeth. He somehow survived the run-in and lived with a scar to prove it.

I should have had both dogs on a leash. Then they wouldn’t have been where only cars are supposed to be.

Nowadays, whenever I see a small squashed animal body on the road, I feel a deep sadness. It seems so wrong. An innocent life just gone.

You can’t warn the animals about the dangers on the road. They’re just running around doing what animals do. Unfortunately, the people who should be taking care, aren’t.

On a Friday morning in June this year, I was outside on the back patio early.

Enjoying the cool quiet before the heat and cicadas came calling, I spotted the fox. He was maybe 20 feet away from me at the edge of the yard just doing what animals do. His coat was plump and fluffy, an orange-red perfection. He never noticed me. I stared frozen as he sniffed the ground then scratched an ear. I had a whole 60 seconds of joy before he headed toward the creek and disappeared down the bank.

That evening, my husband Scott and I went out to a movie. At about 9 PM, we were headed back home. I was taking care to drive the speed limit. Actually, I was driving kind of slow.

Scott said, “Why don’t you speed up?”

Normally I would. But the road wasn’t well-lit and I worry about hitting deer, raccoons, and even opossums.

“I’m driving at a comfortable speed for me,” I said.

It was dark and just felt right to poke along, take it easy. When I turned into our neighborhood I remember thinking, ‘you gotta be careful on the roads close to home, too.’

Just then, the fox that had visited that morning ran across the road exactly where we were passing at 22 mph. I slammed on the brakes and felt the rumble of the tires as they pulsed to a stop. I screamed, covered my face with my hands, and leaned sobbing into the steering wheel.

Scott hadn’t seen the fox. What? he stared at me.

He opened his passenger-side door and looked down at the road. Sure enough, there was the poor little creature lying against the curb.

Scott said, “it’s alive but just lying there. Wait, now it’s getting up, limping a little!”

As I leaned to look, my fox was already trotting across the closest lawn without a limp. He was gone in 10 seconds, disappearing between two houses.

I saw him alive but my body held onto his death. The grief and anguish stayed with me even though I had seen the fox scamper off.

Scott and I talked about the incident for hours that night. He said, “that actually felt personal.”

I agreed. The fact was, I had taken care, done what I could to mitigate the dangers of the road. How was it possible that the timing was so impeccable, that our paths had intersected twice in one day on that fateful Friday?

The morning encounter resulted in joy, the nighttime incident left me in anguish. I was afraid he had run away to die but I held on in faith that he was truly alive and well.

That confusing day stirred up memories of the years when Scott and I were touring and raising our 3 kids on the road. At home, we had the safest car we could afford, we bought the best car seats, and we always buckled up for safety.

But when we rode tour buses, everyone just bounced around in the front lounge without any restraints.

One winter, we were traveling down a highway during an ice storm. Our tour bus suddenly slid off onto the side of the road and then a truck slammed into us. No one was hurt except the bus.

A policeman came to cart us to a nearby motel to wait out the storm. I grabbed the car seats from the storage bay but he said, “no car seats– I’m in a hurry to help other people.” I insisted but he was adamant.

Unbelievable! Twice in one day, we were driving down an icy highway and my kids were untethered. I was totally out of control. All I had to hold onto was faith that God was in control.

What Does The Fox Say 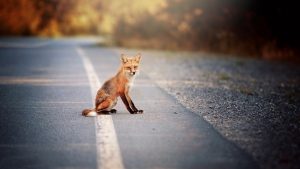 I have thought about and talked about that Friday Fox for weeks now.

Looking for clues about our two meetings, I wonder: were they random or personal?

I learned young that not taking care of small things could lead to suffering and tragedy. When raising my kids, I worked hard to avoid a terrible mistake. I don’t think I could have been more careful.

What difference does it make to take care or make mistakes?

The fox stirs up questions about my fear and about my faith. Can I trust God in the intersections of life, death, and resurrections? And what is my role in the whole business?

Maybe God is not sending foxes to my yard or under my car. Perhaps there’s just an organic and mysterious flow of purpose that moves His creatures to meet at the crossroads of life.

Or maybe He is sending messages through small animals, telling me to take care but trust in His care and leave the outcomes and answers to Him.

As I finish writing this, I get to add one more part to the story: just yesterday a small fox visited Scott and me in our yard. It appeared to be my Friday Fox, just hanging out in the same place I’d seen him two months ago.

This story ends with my fears relieved and my faith turned to sight. My Friday Fox is alive and well, doing what animals do in the world.