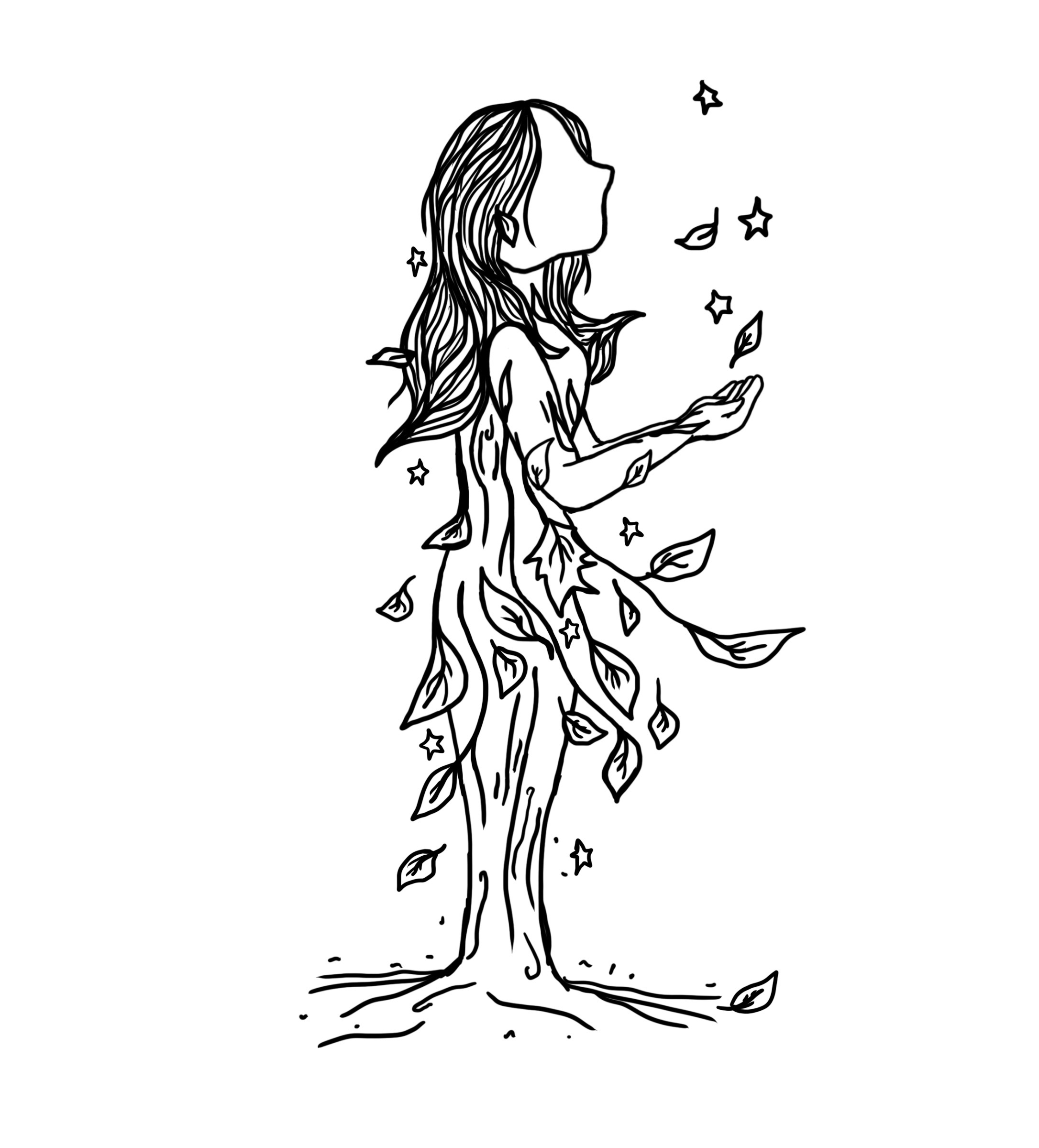 A Story of Redemption and Hope

Chapter 11: God on the Lawn

The crepe myrtle looked dead. Catherine twisted the tip of a branch. She broke off the brittle twig and concealed it in her palm—unable to bring herself to look for green inside.

She had neglected the slender tree this year, forgetting to feed and water it, tucked away as it was between the gate and a wall. Two years ago she planted the sapling at the side of the house, the end of her walkway. Last year new growth showed up in late spring and waited until summer to grace her walk with vivacious pink buds. Later still the buds burst into tiny magenta bouquets. They displayed such glory then: waving like hands in a congregation of praise, the gratitude of a tree coming back to life.

Not that Catherine had ever been part of such a congregation. Any praise-gatherings she attended were proper conservative church services, sedate and civil. Hands in the air would disrupt the peace. She kept hers resting on her lap where they couldn’t pressure the undemonstrative into guilt for their stillness or prompt agnostics to make a mockery with their pretense. Plus it just wasn’t natural. Didn’t matter anyway. She could not remember the last time she went to church.

Catherine preferred to worship in her backyard garden beneath a stately oak.

A tree that looks at God all day and lifts her leafy arms to pray.

This was her kind of church: let the birds and trees extend un-self-conscious gratitude to the one who made them.

Lift her hands with the branches? Sometimes. But she rarely sang with the birds in their joy of being alive. No, not on days when old age rendered her cursing and complaining to her maker, the one who allowed her life to unravel as it had. God could have made matters easier, better. Instead, he let confusion and loneliness become the bookends of her seven decades. Adventures in anguish and grief filled the space between.

Gee, thanks for the invitation to your pity party, Old Woman.

A chill dampened her Sunday morning. Catherine tilted her face to the sky, hugging her heavy coat close and soaking up the sun’s spare heat. Percy deserted her to poke around on the far side of the house. A faint wind changed direction, sending church bells shimmering her way. They rippled through her layers of rough coverings, stirring her like a tremor in the earth. She warmed to the subtle shift that words couldn’t touch. Her hands tingled with a quicker pulse. Arms at her side, she strolled to her favorite bench and sat down.

Growing up in the South, the girl Catherine had absorbed a detached and vague kinship with God, untaught and uncertain about his direct relation to her. Mother had no communication with God except her curses in his name. She taught her daughter no specific religious position save that Religion was the disease driving people to keep people like Mother and her at arm’s length.

Catherine was a mongrel born of a mongrel when it came to pedigrees of faith. She learned that Mother’s lineage contained a great-great somebody who was a solid Christian pastor or preacher. But the trickle-down effect diluted any honest faith she may have inherited. Mother’s family were like ghosts, haunting the spoken and unspoken oaths that hovered on her mother’s lips and throughout young Catherine’s life. By default, she was an outcast like her mother. Close relatives disowned them both. The rare Christmas gifts or guilty checks in the mail were godsends or windfalls, depending on how you looked at it.

Mother despised her family either way. Father’s family wanted nothing to do with Mother or her child. Maybe they didn’t realize Catherine existed. She wasn’t sure. Mother wouldn’t say. Regardless, the familial ties disintegrated in their disuse, leaving the mother and girl virtual orphans.

Catherine’s school friends intrigued her with their descriptions of church attendance and Sunday school lessons. Their mysterious God club stirred her curiosity. They invited her along once or twice, but Mother would not allow it. And so Catherine’s creator defaulted to absent father. She regarded him wistfully or accusingly, depending on the day. On occasion, he resembled a kindly grandfather she hoped to meet one day.

Once, after a friend described her prayers to the Lord, young Catherine decided to give it a try. For weeks as an eight-year-old, she spoke to him every night. Eyes on the bedroom ceiling, hands folded under her chin, she’d tell the Almighty what she needed and ask what he would do.

“Dear God, will you help me with my math like you helped my friend Annie with her spelling test?”

“Dear God, can you make me stop growing so the boys don’t tease me all the time?”

“Dear God, are you really out there?”

She waited. Her stomach rumbled. A muffled television boomed through the wall. The scary neighbor lady shouted two doors down. God’s voice remained muted, his message muddled and mysterious. Without obvious answers to her simple prayers, the girl put her search on hold. She held on to the image of a God-out-there-somewhere, hoping he’d show up later in life.

Now, in her old age, in her new haven, Catherine began to look and listen for him again. This time, she expected no audible voice. She didn’t look for him in every favorable turn of circumstances. Didn’t search for divinity in the people who pressed pamphlets into her palm. Couldn’t imagine that people in the pews had a relational advantage. Nor did she think she heard the Spirit when it was just the ladies’ rancor filling her head. She wished for no special deliveries, no secret notes behind the bookcase, no personal messages between the lines in a storybook.

She invited him instead to the secluded places of her mind, the empty spaces between breaths. Moments when the ladies were silent and Mother didn’t intrude, rare as those moments were. Catherine met with God on the lawn. She searched for his face in her flowers, strained to hear his voice in the trees, and even sought him in the flow of her days.

Her faith was primitive, a crude altar to the awesome God of creation, revealed in more than his glorious plants and animals. No, she did not think every butterfly and bird deserved her worship. But both her cultivated garden and her untamed surroundings spoke of a Magnificence and Power deserving her reverence.

Her heart held the tales of God’s love and redemption in a tentative embrace, resonating with the story of a sacrifice that set people free. With hope she imagined his touch of healing and forgiveness. With certainty she wrapped her head around the ideas of mercy and grace. The best ideas the world had going. She just didn’t know how to sift and shuffle them through her old gray head to the blood-red flow of life in real time.

Catherine did know that her best days were bare feet on the lawn. The voices of chickadees and nuthatches tuned to the creek’s musical chortling spoke volumes to her soul. When the wild wooded paths whispered of hidden dangers and the front door opened to chaos and decay, her world behind the wooden walls, beneath the arching sky, brushed up against her like the mingled breath of a mother and infant. The Spirit of God might be an invisible wind streaming along the surface of the creek, rising to fill her nostrils with fragrances from a distant land. Or it breathed in the tangible love of her dog. Perhaps it glowed in every graceful glory in between.

A gray squirrel scrambled along an oak’s high branch. Catherine stretched her neck to follow its scrabbling ascent. Effortless and fearless, it left the limits of its dwindling branch and leaped across space in graceful suspense. For less than a second, the common rodent transformed into a spectacular singularity. It landed on a solid limb and clambered down the other side of the tree.

Percy returned and leaned his body against her heavy leather boots. Catherine curled her toes inside thick socks to buffer the chill. She tucked one hand into a deep pocket. Her other clasped the crepe myrtle twig, concealing death or restoration. She would let it take its time to tell.

Closeness to God was more an idea than a feeling, more a longing than a fulfillment. But someday, if she believed what people said, she hoped to follow on his heels along the hidden paths that stretched beyond her homemade heaven.

Purchase here or sign up for my newsletter and order an autographed copy!

2 thoughts on “The Woman in the Willow: A Chapter from my Story”