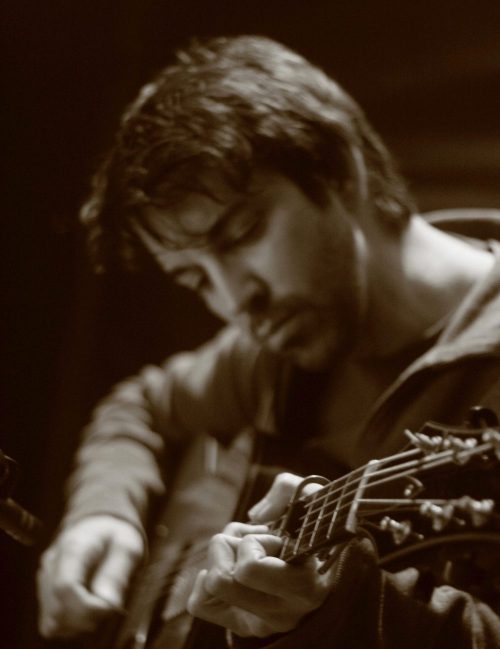 Scott, as your wife and co-member of Out of the Grey, I have witnessed and been a part of your creative process for more than thirty years. I thought it would be fun to get your perspective on creativity in general and songwriting specifically.

Q. Do you mind answering a few questions for me and my readers?

A. You have readers?

Q. Very funny, yes, more readers than you have. So here’s your platform to disseminate all of your accumulated wisdom, (that shouldn’t take long)

What is your first memory of discovering the spark of Life (with a capital L) in relation to music?

A. Thanks for asking. It’s fun to go back and think about these things! I have quite a few memories of coming online to music in my young world.

Being born and raised in the ’60s and ’70s, as you were, we both know that there was so much amazing music being made. 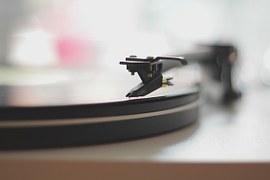 It was 1967. I have a hazy memory of being 4 years old and singing along to The Doors’ “Light My Fire“ as it played on the radio in the suburbs of Los Angeles. My parents liked music, so the radio or record player was always on. I remember hearing the songs of Burt Bacharach and Herb Alpert and the Tijuana Brass. I also recall singing along to hit songs like “Band On The Run” by Paul McCartney and Wings and “Rikki Don’t Lose That Number” by Steely Dan. Of course, my sister and I loved The Partridge Family.

As I got a little older, Elton John and Billy Joel found their way into my ears. I knew every word from The Stranger album. The Eagles plus Crosby, Stills and Nash, and Neil Young were also hugely important in my young musical formation.

Then, in late 1976, “Bohemian Rhapsody” by Queen became a massive hit. Even though it was 6 minutes long, it played on the radio constantly. The sheer force of that piece of art caused a shift in me: I didn’t just love listening to music anymore, now I needed to learn to make it.

I rode the bus to school in those years and remember a very dramatic and wonderful eighth-grader named Michael Sinatra. He made sure that all of us kids on the bus were entertained for the short ride to Holdrum Middle School. Together, we sang “Bohemian Rhapsody” every day for what felt like months. We tried the harmonies, the call-and-answer parts— it was the best!

Soon after, I asked my parents for guitar lessons. They were hesitant to buy me a guitar, imagining I’d abandon it like I’d quit football that year. I persisted.

So, one week when I was sick and out of school, my mom gave in and signed me up for guitar lessons. I played a rented nylon string guitar for a year or so. I practiced my etudes and classical technique until my teacher Sal made the mistake of bringing an electric guitar to a lesson. He played the opening riff to “Free Ride” by The Edgar Winter Group. Bye-bye classical music. Hello Les Paul.

It was time to rock. 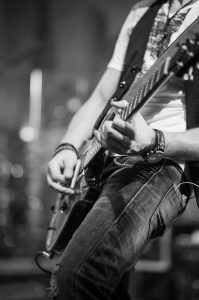 That began my fascination with guitar riffs, song structure, Led Zeppelin, and The Who. And all the good and not so good that came along with them (think young hippie kid). I caught the performing bug at our high school talent show when I got a great response covering a Neil Young song. Playing the guitar and harmonica just like Neil, I also noticed that the girls were finally noticing me. Hooked. It’s an old story.

I must say that Peter Townsend of The Who was probably my biggest influence as a young musician. His honest introspection about what it was like to grow up feeling alone, alienated, and confused resonated with me. And he wrote those emotions into his songs and made another guy in the band sing them!

I realized that great music, poetic lyrics, and the conflicted feelings of a young man could all come together in a song. Also, the way I used to beat the crap out of an acoustic guitar, well, I borrowed that from Pete. Many nights, I played the Quadrophenia album in my room over and over again. “Can ya see the real me, Can ya, Can ya?”

Q. With all of those sparks for your own creativity, when did you write your first song?

A. I was in a band in high school with 3 really talented dudes. We called ourselves Perpetual Change and we covered songs that were somewhat difficult to pull off from bands like Yes, Led Zeppelin, Rush, and The Who, ( Tommy medley ). We also composed some ridiculous instrumentals that only our best fans/ friends liked. At the time, I was experimenting with recording my own original bits in my bedroom using the old “sound-on-sound“ technique with 2 cassette recorders.

I can’t remember if I ever finished any of those fragments but I wrote my first song for Perpetual Change as we were about to graduate and call it quits. It was called “Remains of A Runner.” If my memory serves me, it was an autobiographical lyric about me causing the band to break up. I think I was the “runner“ that the title refers to. Sorry fellas, you see there’s this girl I’m gonna meet and we’re gonna… never mind. 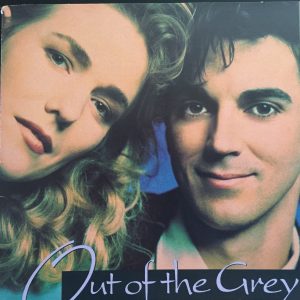 Q. So about that girl. When I first met you at Berklee College of Music in 1985, you played me a song you wrote called, “Empty Pages.” I think I started falling in love with you after hearing that song: it was so emotional and romantic. Although I was already working on my craft, you inspired me with yours. We didn’t co-write until a few years after that. But aren’t you glad we did?

Q. Okay, tell me about your strengths as a songwriter, and how do they show up in our Out of the Grey music?

A. It’s taken me a long time to develop and embrace my strengths as a songwriter. As a younger songwriter, I had very little faith in my ability to present and complete an idea, even when we worked together in Out of the Grey. I was always good for a title, a verse here or there, an effective bridge, and the guitar parts to hang it all on.

You were very prolific from the start, so I was always happy to give your songs some guitar muscle or help edit and shape an already excellent idea. Then there were what I call your small beautiful songs, ones that needed no help at all from me. They were usually the super-fan favorites and deep album cuts. It was always a pleasure to collaborate with someone who is as meticulous with the craft as you. Your melody writing, interesting harmonic structures, and care for every word of a lyric inspired me to write more and get better. And that’s the truth.

As time has gone by and I’ve shifted focus into my music licensing company, Global Genius Productions, I’ve had a lot more opportunity to write for all manner of situations and I’ve been able to grow immensely as a writer. I got better in the second act and I’m really grateful to have had one!

Q. Will you tell a story about one of your favorite OOTG songwriting experiences? 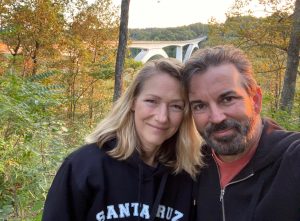 Q. Yikes, I can’t believe it either. Moving right along, how has your approach to songwriting changed since the early ’90s and our first years as Out of the Grey, through our latest recording in 2015?  And what is your songwriting focus currently?

A. I think that my songwriting has changed in the same way I have personally changed. I used to care a lot more about being clever, doing something unique, being recognized and appreciated by our peers. This was reflected in the early albums when you and I had particular rules about what was cool and what wasn’t. Seems kind of funny now. These days, my songwriting is stripped down, a bit more basic when it comes to chord structure. Lyrically, I’m taking a more minimal approach, trying to get to the real emotion with less flower and fewer words. In some ways, I’ve come full circle and feel like a singer/ songwriter, more like the artists I grew up listening to.

Q. Very cool and so true. On a related subject: Scott, your love of literature and various book genres has always inspired me. I often turn to you for editing and critiquing of my fiction and non-fiction writing.

Can you describe how fiction and other genres (like biography, personal essays) add to your life? Give examples.

A. I’ve loved books my entire life. As a kid, I had a rich interior life populated with books and stories. Literature, biographies, and personal essays continue to be the main source of inspiration for my songwriting. I don’t think it’s easy to write well unless you’ve read some great stuff. I’m no genius and I need a lot of fuel and inspiration to be creative. If indeed our lives are a story, the great stories will provide lots of clues for creating a purpose-filled life. There’s so much inspiration, hope, and beauty in the stories that others have written. This has always been the case for me. I find it hard to believe when people tell me that they don’t like to read!

From Mark Helprin’s miraculous novels to Michael Chabon’s insightful essays, there are far too many to list in between. Perhaps that’s a separate blog: What Inspires The Dente’s?

Q. Do you have any advice or insights about the creative process that you’d like to share?

A. Sure, I have a few muddled thoughts: 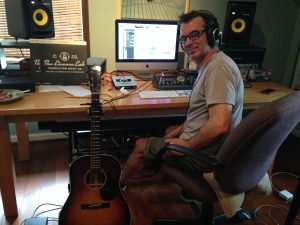 I think the beauty of the creative process is that there are so many ways to travel and so many places to stop and look around. It took me a while to learn that waiting for inspiration to strike is a sure way for me to get nothing done. Songwriting is a craft that can be learned like most crafts. But you have to put in the time and seek out the masters of the craft. Study them, absorb, and emulate. It’s hard work finding your own voice.

Remaining a fan of others’ work and knowing that their glory and brilliance don’t detract from my own, has been hugely important. I can enjoy and even revere someone else’s creation, knowing I can’t be them and that’s okay. That’s great actually!

Loving and listening to good art gives me fuel, and love for the colors in my own paint box. I’m pretty much the result of everything I’ve taken in over the years. Hopefully, whatever I create adds my own nuance to the conversation of Art. I know more about music than anything else in this life. My heart was captured, shaped, and maybe even saved from loneliness and confusion, by sound and beauty and art. I owe so much to the creative life. It hasn’t been easy, it’s rarely been smooth, but it’s how I know to live. So I’m grateful.

Thanks, Scott, for engaging my questions about songwriting and creativity. I’m sure readers will have thoughts and questions for you in the comment section.

34 thoughts on “Something Special: An Interview with Scott Dente”