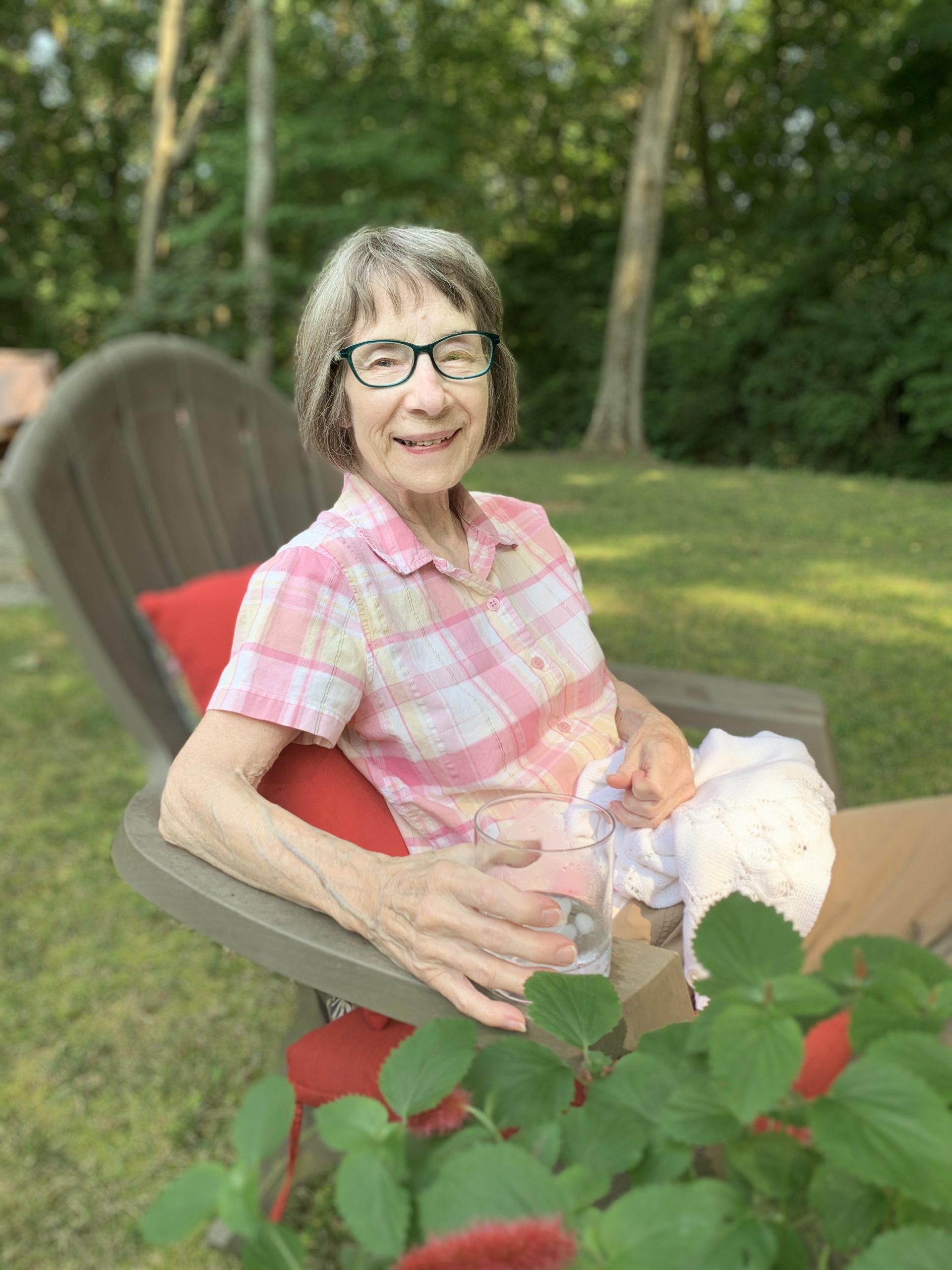 Oh no! My mother’s toenails, clipped just this morning, are now strewn across my kitchen floor. Pieces of my mother I’d meant to throw away.

I’ve just spent time with her in the Memory Care facility. After my one-hour drive there, I had arrived in fear of what condition she’d be in.

Last time I visited, only a week ago, I’d found her propped in a wheelchair in front of the communal television. Three other residents stared at a daytime drama, but my mom’s eyes were shut tight, her chin hovered above her chest, her neck swayed like a tree branch strained from the weight of her matted head. I’d moved close and whispered her name, “Sandy…Mom?”

She’d stirred and surfaced slowly. That day, it had taken her more than an hour to emerge from the land of catatonia. For months now, she has not stepped outside the realms of dementia.

But this morning when I went through the double doors and saw my mom upright in the wheelchair at a table, I said to myself, “Thank God, today is different.”

She sits in the dining area among 4 equally silent, semi-comatose adults, some younger than her 82 years, others a bit older. I don’t know if they have Alzheimers or vascular dementia like my mom. It all looks the same to me.

“Hi, Mom,” I catch her eye from where she stares at something across the room. Her eyebrows lift and her head rotates slowly my way.

“Oh, hi,” she says, “what are you doing here?” She seems to recognize me, her middle kid of three, all of us now in our fifties. All of us awed and alarmed at the swift changes in our mother this past year.

“Sure,” she says and leans in with a weak sideways squeeze.

Karen, the nursing assistant I recognize from my last visit, is handing out lunch plates. She places some mystery meat and peas in front of my mother then snaps a bib onto her neck. “Your mom got up late today, 10 o’clock.”

“Who got weighed today, what?” Mom is a bit hard of hearing and her mind scrambles the words that actually do register.

“She said you got up late today,” I keep my tone light, a smile on my face as I smooth the bib on her chest.

Mom says nothing, plays with her fork but doesn’t lift it.

Karen continues, “She had a shower and I washed her hair but she didn’t like it much.”

I touch my mom‘s head and sift her damp gray-brown hair with my fingers.

“Play with my hair” she used to beg when a headache was heavy on her. “I’ll give you a nickel for every minute you do.”

The money was rarely tempting to 10-year-old me. Mom didn’t complain when I half-heartedly massaged her scalp. She was  satisfied by the least amount of attention she got from her busy kids. But I loved my mother so much that, even then, I had the sense to feel guilty for giving her less than 5 minutes of my time. The kind of guilt that fades fast but resurfaces in times and places like this.

Mom looks down at her plate, makes no moves to eat. I lift the fork to her lips and she takes a bite.

Sitting across from my mother at the dining table is Janet. She’s 70 at most. Plump and smiling, I’ve seen her in the halls with a baby doll in her arms. Here at the table, no doll in sight, she’s smiling and glancing at Mom and me.

She says, “Divorced or dead, I seen him on this end but he’s not swift.” Then she chuckles, catching my eye, like we’ve shared a joke. I laugh with her for 2 seconds then quickly lift some peas to my mother’s lips.

I guess Janet, like my mother, retains some of her mannerisms even as she loses her mind. Her contagious laugh and my mother’s lifted eyebrow as she pats my cheek in pretend scolding, are old patterns their bodies hold. Though their words contain the right tones, most have lost their meaning.

After feeding Mom a few more bites, I look around for an appropriate place to clip her toenails. No one wants to see other people’s overgrown and outdated body parts flying around the room. I wheel her to the sitting area.

An old man named Jack is pacing back-and-forth in front of the emergency exit, his long limbs jerking in agitation. Karen asks him where he’s going. He says he’s going home. Karen tells him his daughter has his car and she’s probably running a few errands.

“Is she coming back to get me?”

“I think so.“ Karen lies like a pro and guides him to a chair on the other side of the living room. A fake fire flickers on the TV screen, replacing the fake aquarium from last week. Jack sits and stares at the floor, a confused look on his face.

Seeing no waste basket, I spread my jacket across my lap and cradle Mom’s size 5 foot. I peel her sock and note that her heel still bears the bruise-like bedsore formed when she lay sick from Covid nearly a month ago. I haven’t seen the bedsore on her backside in weeks and the staff says it’s not getting worse. Or better.

I try to direct the clipped nails to the jacket in my lap. When some go pinging across the room, I notice no one notices. Handling her familiar limbs, I note these crooked toes are not much different from when I was a kid, from when she was a young woman.

“Rub my feet or just squeeze,” she’d often plead from the couch as the sun was going down. I almost as often said, “No, Mom,” because my summer day was still going strong even if hers was a worn nub from her thankless job. Gilligan’s Island blared on the tv and if I did squeeze, it was distractedly.

I rub and squeeze her feet tenderly now, sharing with her these memories of mine. She nods with an absent mind. I forgive myself for my childish selfishness, just as I would forgive my kids. Just as I know my mother forgives me.

This morning, her swollen left foot and ankle showcase those gnarly toes she’s complained about for as long as I’ve known her. Today, they sprout like the grotesque legs of a bloated tick, attached but somehow not part of the overall organism. Her ankle’s been this thick since my sister, my brother, and I made the decision last year to get help with our mother’s decline. Professionals in facilities provided an outside view of our ingrown worry about what was happening to our mother’s mind. In this past half a year, her body changed, too. New meds, institutional food. The hallucinations finally dissipated but her body holds on to the swelling.

When I straighten her leg to get a better grip for filing her toenails, she winces, though her eyes are now closed. Is she dozing or zoning? Her dementia and her weeks in bed have weakened her. And tightened the back of her legs. Too many hours in the fetal position. I hadn’t seen it. Quarantined from it. From her.

During my last visit, her twice-a-week physical therapist said Mom still wasn’t walking. In fact, she could barely stand.

“She should be doing more stretching.” She demonstrated how to stretch her legs back into shape. I hoped the staff was watching. I could not be there every day to rehabilitate her legs. Was this above their pay grade?

This morning, Mom seems satisfied with the wheelchair. But the staff would benefit if she could bear some of the weight of her showering, her toileting, her shuffling to and from the dining area.

My mother is mostly cooperative with those paid to care for her.

“We love Sandy, she’s always joking around,” her caretakers insist. They say she sometimes refuses to do what they ask. Who would blame her? Strangers are putting her in the shower and on the toilet, pulling down and up her adult diapers every two hours. Getting her in and out of her bed.

Today, the toenails are up to me.

When I finish clipping and smoothing those old toes, I wrap the scraps and dust in my jacket. Tucking it into my bag, I admonish myself to remember to shake it out in the trash when I get home.

“Okay, I love you too, Chris. Thanks for coming.”

Nothing in her tone to indicate emotion but she lifts the tissue in her hands and dabs at a fake tear. I can’t tell if it’s a cover up of some un-shown sadness or one of her many ways of being funny.

When I kiss the top of her head, a trickle of grief begins to fizz in my nose, thicken in my throat.

I buckle up in the parking lot and start the car. Anguish cascades through my heart and crashes in the deepest parts of me. By the time I drive the many miles home, I’ve let the waterfall wash through and forgotten all about those pieces of my mother gathered up in my jacket.

At home, I lift it unthinkingly from the bag and it spills its contents onto my floor. Oh no! She has come home with me in those jettisoned remnants of a body now broken. Always there, my mother, and now I marvel and weep to sweep her up like any other piece of dust.

My mother passed away on June 2nd, 2022 after dementia took its toll on her body and mind. Though, to me, it felt like a slow-motion nightmare, the time between her dementia diagnosis and her death was less than a year.

I had the painful privilege of being with her almost daily in her final weeks in a skilled nursing facility. She ended up there due to a bedsore she developed in her Memory Care facility. While under a covid quarantine there, she was so badly cared for, the bedsore became a deep wound that needed skilled intervention and attention. Those two weeks in bed and in isolation had left her body weaker and her dementia worse. Despite the skilled nursing wound care, she never regained her ability to walk or her ability to heal.

So there she was in the end, my dear mother, in that hospital bed, her limbs rigid, her mind lost to most of her memories.

The spring flowers waved at me each day as I passed them when entering the housing I knew would be her last. As I rode the elevator to her room, my mind and heart left the clear skies of spring and entered the murky world of a hospital corridor.

Each day I arrived in her room trying to be ready for whatever I would find. Some days, Mom seemed to recognize me and lifted her lips in a slight smile. Other times, she stared past me, and refused to eat or drink.

I endeavored to alleviate the suffering we were sharing in that sunny room with a view of which she wasn’t aware.

Days before she passed in her sleep, I told her the story of her life and mentioned her children, grandchildren, and great grandchildren by name. I let her know that each of us loved her, were safe and happy, and that she was safe and could be happy, too,

“Be free, Mom, free from worry about the people you love. You’re free to finally just be.”

60 thoughts on “My Mother in Pieces”